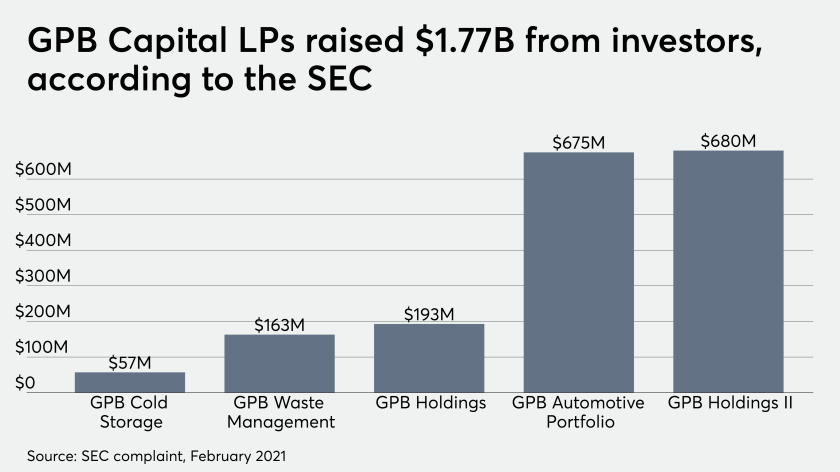 With a billion-dollar fund manager facing a barrage of regulatory cases, the wealth managers that sold its pricey alternative products could be left holding the bag.

Hundreds of clients have already filed FINRA arbitration cases involving sales of $1.8 billion worth of GPB Capital’s limited partnerships, according to plaintiff attorneys. After fraud cases last week charging the company, its CEO and the placement agent that pitched the LPs to wealth managers, the lawyers expect there will be many more claims against wealth managers.

More than 60 different firms acted as “downstream broker-dealers” for GPB’s products, generating $187 million in commissions and other selling fees from more than 17,000 retail clients, according to the SEC. The group includes big names such as five of Advisor Group’s firms and Hightower. Investigators say the investors are at risk of losing everything.

To consumer advocates and attorneys, the GPB Capital cases represent only the latest example in a troubling continuing trend of notorious failed alternative-investment products such as those offered by the Woodbridge Group of Companies and Medical Capital.

“The problem here is, this is not a unique case,” says Christine Lazaro, director of the Securities Arbitration Clinic at the St. John’s University School of Law. “When the SEC under the last administration were pushing through rules to open up the private space even further, this was the risk and harm the investor advocates were talking about.”

Representatives for the SEC declined to comment on whether it’s investigating the wealth managers that sold GPB products and the prospects for reforming two rules it issued last year on exempt offerings and the definition of an accredited investor. Representatives for state-level regulators didn’t respond to a question on whether the wealth managers could be charged.

Some 200 clients have filed arbitration claims against 21 BDs and their representatives in cases relating to the GPB products, according to attorney Courtney Werning of Meyer Wilson. She anticipates there will be a “second wave” of claims after the fraud cases last week, she says.

“Brokerage firms are supposed to be the gatekeepers that prevent fraudulent investments like this from ever hitting the marketplace,” Werning says. “The brokerage firms that did approve these didn’t do much due diligence at all. So that’s pretty shocking.”

Hightower declined to comment on the GPB cases, as did Advisor Group. In the second half of 2019, at least six clients of the former Ladenburg Thalmann firm Triad Advisors filed arbitration cases seeking $1.6 million on claims including negligence, failure to supervise, and breach of fiduciary duty, according to the firm’s last quarterly filing before Advisor Group took it private.

Triad was also one of 76 firms named in a federal class action lawsuit filed by investors in the Western District of Texas in October 2019, the filing states. “Triad intends to vigorously defend against all of these matters,” the document stated at the time.

“Without them, this scheme is not possible,” says attorney Joe Peiffer of Peiffer Wolf Carr Kane & Conway, which is representing more than 150 clients seeking damages from dozens of BDs and their reps.

GPB Capital allegedly misrepresented the source of distributions it paid to clients who invested in LPs focused on “middle-market” private firms such as auto dealerships and IT firms. The firm allegedly used money from other investors in a Ponzi-like scheme rather than getting it, as promised, from the businesses’ operations, investigators say. GPB has denied the allegations.

David Gentile stepped down as CEO of GPB “until current matters are resolved,” spokeswoman Nancy Sterling said in a statement. “GPB will continue to work toward increasing asset values and cash flows, while ensuring that the operating companies, their employees, and their commercial partners continue to deliver excellent value to our customers, and ultimately to our investors.”

Austin, Texas-based Ascendant Capital and its owner Jeffry Schneider reeled in wealth managers to sell GPB products with promises of high commissions at so-called due diligence events featuring “a whole lot of socializing and not a lot of data,” Werning says. Most of the investments happened between 2016 and 2018, when multiple investigations of GPB first became public, she says.

“Two of those funds blew right past their threshold for securities registration and didn’t even bother to register those funds,” Werning says. “There’s just no excuse on the part of the brokerage firms who were selling illegal products at that point.”

Ascendant didn’t respond to requests for comment on the cases; neither did New York-based Axiom Capital Management, where Schneider was registered between 2013 and 2017. The SEC refers to Axiom as “Broker-Dealer 1” in its case, which doesn’t charge Axiom with any crimes but notes it acted as the offering entity for GPB’s funds until another one called AAS began doing so in 2017. Schneider and Gentile are minority owners of AAS, the SEC says.

The funds eventually reached tens of thousands of investors, including 4,000 older adults, as a result of “rah-rah people at each firm” who encouraged other reps to sell the products after Ascendant won them over, according to Werning. Some brokerages even went as far as describing the risky products as “CD alternatives” to clients seeking stable returns, she says.

In November, a GPB investor represented by Peiffer’s firm won an award of $1.35 million in FINRA arbitration from a defunct BD, the ruling shows. He says he’s hopeful the arbitration, another pending class action in Texas, and the new charges against GPB will force BDs to take their due diligence obligations more seriously.

“These people present themselves as fiduciaries when in reality they’re thirsty sales warriors,” Peiffer says. “It’s the bait and switch of the whole thing.”