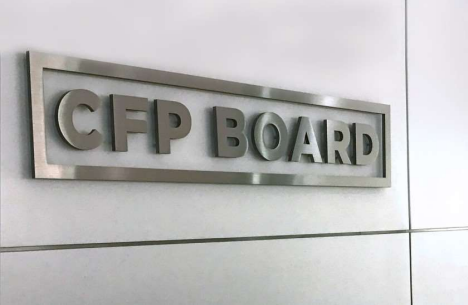 The CFP Board states it has a lofty mission, but is no longer trying to live up to it.  Here’s what the group espouses, as seen on its website:

The mission of Certified Financial Planner Board of Standards, Inc. (CFP Board) is to benefit the  public by granting the CFP certification and upholding it as the recognized standard of excellence for  competent and ethical personal financial planning.

I don’t think that’s what’s actually happening. Here’s the background: On July 30, 2019, an article  in The Wall Street Journal detailed that the CFP Board had 6,300 CFP certificants with FINRA  disclosures who appeared on the group’s site as if they were in good standing. A subsequent WSJ  column made the case that investors need this cop to toughen up.

According to the Journal’s coverage, the CFP Board was failing to do even the most basic internet  searches that would have revealed which certificate holders were in trouble with FINRA and other  regulators. Furthermore, the group rarely took enforcement actions of its own before regulators did

— and frequently did not take action even once the regulators had gotten involved. Rather than  vetting the advisors who hold its designations, the CFP Board was not really enforcing much at all.

As a response to the WSJ articles, the CFP Board formed an Independent Task Force on  Enforcement. Their findings were scathing. The committee noted that the problems the WSJ  reported were not new and were systemic. One of the task force’s recommendations read: “The  enforcement program should include proactive elements, including periodic audits of certificants  based on: (1) risk factors, history of noncompliance and other systematically applied objective  indicators and (2) random sampling.” Instead, the CFP Board rejected this recommendation,  deciding instead to prioritize spending money on advertising.

I am one of, I’m sure, tens of thousands of planners who obtained a CFP because I wanted to be  held to the strict standards the group advertises and have financial planning be viewed as a  profession. Having been a CFP holder since 2004, I do my best to uphold these standards on behalf  of my clients. I’ve been talking about the lax enforcement problem for years. I’ve also been  requesting, again for years, that all of my CFP dues go toward enforcement and not toward  advertising. My request is always denied.

Yet I still had hope that, after the task force’s report, the CFP Board would start doing what its  advertisements said it already did. Indeed, Jack Brod, the 2020 Board Chair, even reached out to  me. Jack was a former Vanguard executive who worked under the firm’s late founder, John C.  Bogle, whom I’ve long admired. Hopefully, I wrote an open letter to Jack and the Board. Could Jack  Brod do for financial planning what Jack Bogle did for giving investors a fair shake?

I was surprised to learn that the CFP Board’s top two executives received considerable raises in  2019 despite the hypocrisy that the Journal exposed about the organization’s inattention to  enforcement that year. (The CFP Board had refused to release compensation figures previously but  IRS Form 990 requires such disclosure for nonprofits.) When asked how they could reconcile these  large pay increases with such a public exposure of failures, a spokesperson replied, “Compensation  discussions are confidential.”

The group also changed its marketing strategy. Instead of its traditional messaging — that CFPs are  thoroughly vetted and held to a higher standard — the group put out a new “CFP Professional”  campaign. When I asked them about the ads, I was told: “Our 2021 Public Awareness Campaign  was informed by extensive consumer research conducted by Heart + Mind Strategies, which found  that consumers who work with a CFP professional feel more confident, optimistic, secure and at  ease. Thus, our advertising emphasizes the peace of mind that comes from having a CFP  professional help to prepare a financial plan.” To me, this sounds a lot like the Annuity Alliance

marketing campaign for working with annuity professionals. Is that what CFPs — fiduciaries — want  to emulate?

I also noticed that the disclaimer on the site is getting longer, essentially putting the responsibility to  verify planners’ disclosures on the consumer rather than the CFP Board. This makes me wonder: if a  CFP lies to the Board about having FINRA disclosures on their record, why would they be expected  to tell clients the truth? The Board responded that lying to a client or the CFP Board is against the  CFP standards.

I think there is a conflict between the CFP Board telling the public that it’s a small organization with  “limited resources” to vet planners and enforce its standards, and then spending large amounts of  money on advertising. The Board doesn’t see it that way. They think the ad campaign fits into the  group’s four strategic priorities: Awareness, Access, Accountability, and Authority. “The campaign’s  goal is to increase awareness of CFP certification and the value of working with CFP professionals,  not to increase awareness of CFP Board as an organization,“ they told me.

More than a dozen years ago, I helped a client file a complaint against a CFP certificant who, among  other things, double dipped in selling the client an annuity, taking both commission and an ongoing  AUM fee so that the client was paying an estimated 5.29% annually. The CFP Board initially lost the  complaint but, after we sent it in again a year later, found no wrongdoing. I wrote a piece in 2012 on  the case for The Wall Street Journal: Is the fiduciary standard a joke? CFP Board CEO Kevin Keller  responded by writing a counterpoint, Why our fiduciary standard is no joke.

In his article, Keller claimed that under standards in effect by 2012, the outcome of my client’s case  against his CFP would have been different and that a breach of the CFP Board’s fiduciary duty  would generally result in a suspension from using the CFP mark for one year and one day. Recently,  I asked the group to point to any cases where it disciplined a CFP before regulators did. The board  declined to share any examples.

The 2019 task force found that “the CFP Board’s enforcement program has not met the reasonable  expectations created by its bylaws reinforced by its public characterization of the program.”

Rather than taking corrective actions to live up to its advertisements of a higher standard and  enforcing fiduciary duty, the CFP Board decided to:

 Abandon the messaging to the public of enforcement of higher standards and adapt a  marketing campaign using the term “professionals,” which is similar to that of annuity sales.   Add fine print to protect and benefit the CFP Board, essentially stating it has no responsibility  to the public.

 Reward the two most highly compensated officers for growth while it ignored its mission to  benefit the public.

 Change the bylaws the task force found it had previously violated with its actions. I made  multiple requests for a copy of the previous bylaws to see exactly what changed, but was  refused; the old bylaws have similarly been removed from the website.

John C. Bogle took a difficult path in doing the right thing to benefit the public, and Vanguard grew  into a giant as a result. The CFP Board has chosen the far easier path of advertising for growth. I get  bombarded with pop-up ads, direct mail and live telemarketing calls imploring me to renew my  membership — all marketing activities paid for with money that should have been spent catching  CFPs who don’t uphold our standards. In short, the evidence leads me to believe the CFP Board has  completely given up its mission to benefit the public.

My CFP renewal is due on June 30. Will I renew? Probably; not only because, like most of us, I  continue to believe in the stated CFP mission, but also to keep abreast as an insider and provide  transparency to the public that the CFP Board seems unwilling to share.

Here’s what I think the true mission of the CFP Board is: to benefit CFP Board top management by  growing revenue through providing all dues-paying CFP certificants (irrespective of commitment to a  fiduciary standard) a collective advertising channel to grow their businesses. This does not sound  like a charitable nonprofit mission to me.

Read More: The CFP Board has given up on protecting the public from unscrupulous advisors