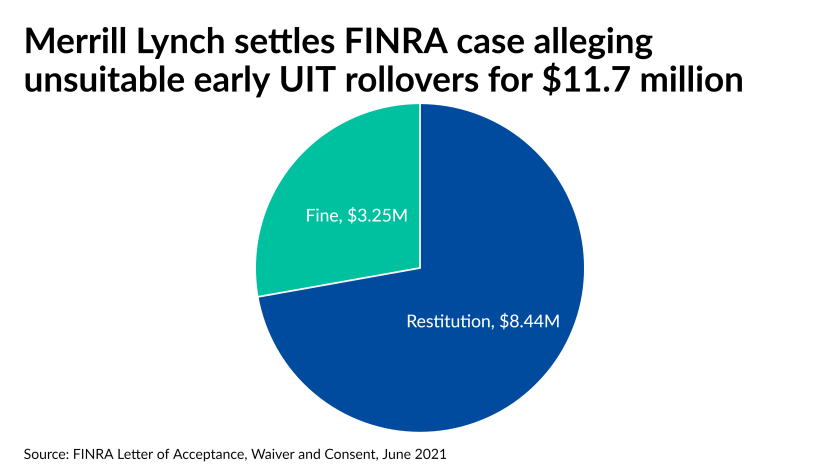 FINRA’s latest case has taken nearly a decade to resolve.

About $2.5 billion of the sales — or 8% of the total — came from UITs purchased partly or entirely as  rollovers from other UITs that Merrill Lynch brokers sold more than 100 days before their maturity  dates, FINRA investigators say. Roughly 3,000 client accounts paid a combined $8.4 million in sales  charges that they wouldn’t have been subject to if they had held the UITs until maturity, according to  FINRA.

UITs offer a fixed portfolio that terminates at a specified period after it’s issued — usually a year or  between 15 and 24 months. In September 2016, FINRA issued a targeted examination letter, a four-part  request asking members for information about early UIT rollovers, which it defined as the sale of a UIT  at least 100 days ahead of the ending date of the portfolio.

In settling the case on June 25 without admitting or denying the charges of unsuitable sales and a failure  to supervise its force of more than 30,000 registered representatives in 4,200 offices, Merrill Lynch  agreed to pay a fine of $3.25 million in addition to the restitution plus interest.

“We entered into a settlement to resolve concerns about early rollovers of certain unit investment  trusts between 2011 and 2015,” Bank of America spokeswoman Alliccia Hernandez said in an emailed  statement. “We have addressed these concerns through enhancements to our supervisory system.”

Despite substantial regulatory scrutiny of alternative products in general, and UITs in particular, the  products remain popular with wealth managers due to issuer payments and other incentives for brokers  and firms such as dealer concessions for selling them, according to Teresa Verges, director of the  Investor Rights Clinic at the University of Miami School of Law. The products also usually carry  “significant fees” of about 3.75%, Verges said in an email.

“We have handled many cases for clients placed in UITs that were either too risky for their profile or  investment objectives or, like in the present case against Merrill Lynch, subjected to UIT switching  activity,” Verges said.

“Fund ‘switching’ — moving between front-load mutual funds and UITs — is a form of excessive trading  that burns through an investor’s principal through excess fees,” Verges continued. “Like old fashioned  churning cases, this strategy only enriches the firm and the broker. FINRA’s action against Merrill should  send a strong message to firms that this activity is per se unsuitable and violates brokers’ obligations to  their clients.”

From January 2011 to December 2015, Merrill Lynch flagged only those early UIT rollovers that occurred  in the seven months following the initial offering period for the products, according to FINRA. Therefore,  the firm failed to detect thousands of potentially unsuitable early rollovers into the same UITs and  thousands of other potentially unsuitable rollovers as well, FINRA says. One representative recommended 75 early UIT rollovers and the firm’s automated systems didn’t flag any of them,  according to the regulator.

It’s not the first time the wirehouse has paid a settlement relating to UIT switching, and it’s not alone  among wealth managers in making substantial payments after FINRA investigations into UIT rollovers.

In August 2012, Merrill Lynch agreed to pay a fine and restitution of $530,000 after the regulator alleged  a former broker recommended 37 unsuitable short-term UIT and closed-end fund transactions, many of  which involved switches between the products. A year ago, FINRA ordered Advisor Group’s SagePoint  Financial to pay $1.6 million in a settlement of a case involving early UIT rollovers as well.

The same day it announced the most recent Merrill Lynch settlement, FINRA issued an “investor  insights” newsletter about UITs.

“If you are counting on holding a UIT until termination, be sure to note any special early termination  conditions in the trust’s prospectus,” the regulator says. “And finally, if your registered financial  professional recommends that you rollover a UIT position to a new UIT before the maturity date, be sure  to ask whether this will cause you to incur increased sale charges — either immediately or over time.”