Making Arizona the eighth state to adopt some of the most stringent regulations as it relates to annuities and potential bait-and-switch hypothetical illustrations. 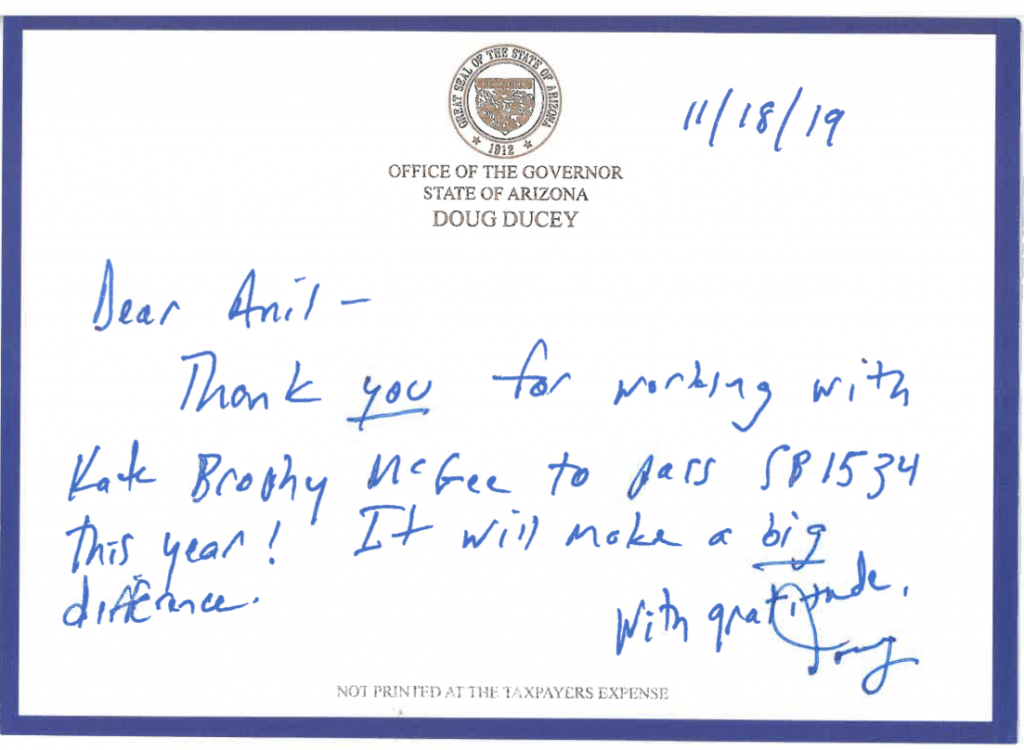 Anil Vazirani worked with AZ Senator Kate Brophy McGee to put into her hands the research and information required for her to put into a bill which passed as SB 1534, making a big difference for Arizona seniors to avoid the potential bait and switch of hypothetical annuity illustrations.

“What happened is there are insurance companies that offer fixed indexed annuities, and a lot of these annuities are good and they fit the retirement part, the preservation part of your life, but there are certain insurance companies as many of you know that have listened to me for over close to eight nine years know, I’ve been very critical about a few insurance companies. Indexed annuities in itself are not bad, but anytime you see a non-guaranteed hypothetical illustration, your antenna’s need to go up, true to their nature they are non-guaranteed, they are hypothetical, and in retirement these vehicles could be very dangerous for our wealth where you could potentially have a derailed retirement if you’re banking on those returns to come to fruition, and we’ve had many issues with consumer complaints.”

“We’ve worked very closely with the Attorney general’s office, and the National Association of Insurance Commissioners set standards to protect seniors from these bad actors, and only seven states have adopted these NAIC regulations.”

“It’s critical here in Arizona, particularly given how our elderly population is growing exponentially, many are on fixed incomes and they rely on those investment incomes to support their lifestyle, and without the help of Senator Brophy McGee, we would not be in an amazing position to be the eighth state to pass the most stringent law in the United States.”

“When you see these illustrations you see this insurance company showing you an eight – nine – ten percent annualized return with without any risk! Eight, nine, ten percent, without any risk? So then the second aspect that you’re not aware of is a lot of times these insurance companies will use an index, not the Dow Jones, not the S&P 500, that have a track record, but these are indexes in infant stages that have been around maybe one year, two years, or three years, and how can you do a ten year projection on an index that has only been around two or three years? That is why I joke on the air are these illustrations made up? or is it Madeoff?”

Annuities with high, stock-market-linked returns should be registered as securities, Anil Vazirani says.

Anil Vazirani, a financial advisor who regularly sells indexed annuities, says some life insurers should be more conservative when they tell consumers about possible returns from indexed annuities that aren’t filed as securities.

If an issuer wants to show a consumer that an annuity can earn 10% annually, with no risk, the issuer should file that annuity as a security, and an advisor who tells a consumer about the annuity should have a security license, Vazirani said last week in an email interview.

“This is a major consumer protection issue,” Vazirani said.

Actuarial Guideline 49 now limits the kinds of returns agents can include in life insurance performance illustrations.

An indexed annuity offers a fixed rate of return that’s backed by a state-regulated insurance company. A feature linked to the performance of a stock index, bond index or other investment index can increase the total crediting rate but never reduce the crediting rate below the guaranteed level.

Today, issuers choose to register some indexed annuities with the SEC, but most are not.

In May 2017, he told the U.S. Department of Labor that he thinks some organizations have designed complex, proprietary indexed annuities to be too much like non-SEC-registered versions of variable annuities.

Vazirani is now trying to persuade the SEC to give more attention to the issue of what he believes to be problems with the hypothetical returns used in marketing efforts for some indexed annuities.

Originally, Vazirani said in the email interview, most indexed annuity issuers linked the contract crediting rates to the performance of established, well-known investment indexes, such as the S&P 500 stock index.

Today, he said, some issuers are using relatively new indexes with no track record.

A handful of companies are showing consumers high hypothetical returns linked to the performance of the new indexes, he said.

“Insurance products are not meant to compete with the stock market and other growth vehicles,” Vazirani said. ”Being able to show hypothetical [annuity] returns of 9% to 10% annually is setting the wrong expectations for the client.”

Regulators should limit the amount of hypothetical annuity growth that an agent can show a client, Vazirani said.

Agents should understand that, if they talk about the future performance of an exotic investment index without a securities license, they are giving investment advice without an investment license, Vazirani said.

If agents have securities licenses, then regulators can hold the agents accountable for what they say about future annuity returns, Vazirani said.