https://retirementplanningscottsdale.com/2019/12/30/anil-vazirani-scottsdale-investment-advisor-shares-ubs-clients-burned-by-iron-condor-strategy/ UBS clients who were invested in a leveraged, esoteric options strategy described as a “conservative” and “low risk” way to get extra yield from their portfolios were shell shocked by losses greater than 20% that they experienced at the end of last year. Many are now accusing the firm, and the two advisors who ran the so-called Yield Enhancement Strategy, of misrepresenting the dangers and have filed a series of complaints with the Financial Industry Regulatory Authority.

Per a recent Wealth Management article, Jacob Zamansky, a securities attorney in New York, is representing 15 of those investors who have filed arbitration complaints against UBS, claiming the firm not only misled them about the risks, but the advisors also engaged in “enormous excessive trading” to try to recover what they lost during the excessive volatility in the markets at the end of last year. Some clients lost more than 20% in December alone, according to the complaints, and the total amount lost could approach $1 billion.

UBS admits the large market swings in December hurt the strategy, but those dangers were clearly disclosed to investors, who signed documents claiming they understood the risks. But one high-net-worth investor represented by Zamansky said he would have never agreed to participate in YES if he knew about the potential downside, according to a complaint reviewed by WealthManagement.com. His name and identifying information were redacted from the document to maintain his privacy.

To preserve his principal and avoid losses, the investor told his UBS financial advisor he wanted most of his money, at least 80% of his net worth, invested in municipal bonds. In early 2017, his advisor recommended YES to boost returns on the portfolio. The strategy has been run by the team of Matthew Buchsbaum and Scott Rosenberg for over 12 years, first at Credit Suisse and now at Flatiron Partners, a practice in UBS’ private wealth management division.

The advisor said it had “very low correlation to equities and bonds” and used options to mitigate market exposure on both the upside and downside, the advisor said in an email exchange with the investor. The investor was open to the idea but pushed back on the high fee. In addition to charging a percentage fee on the assets used as collateral, called a mandate, clients were charged an additional 1.75% fee for YES. His advisor insisted it was the right move. “They work with some of the wealthiest families, family offices, and foundations in the country…heavily scrutinized on fees…no one complains!” the advisor wrote in an email to the client. “Give it time and it works…think it is ideal for your situation.” 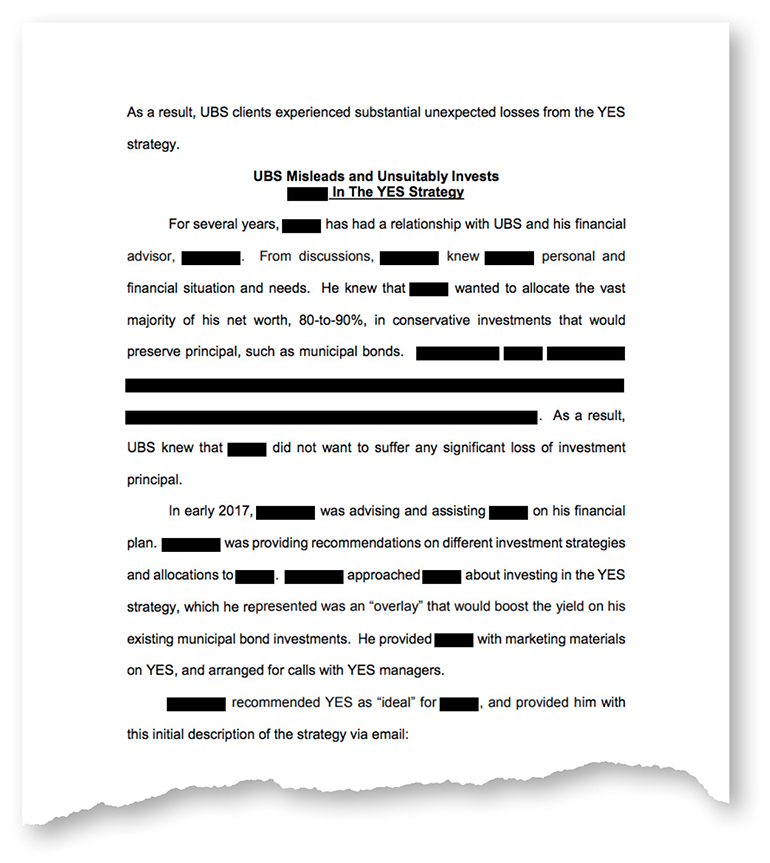 The YES program can be used by any of the 6,790 UBS advisors. Clients were told by their advisors that the options strategy was overlaid on more than $5 billion in client assets, according to Zamansky. Although YES is administered in separately managed accounts, the strategy is run by the managers at Flatiron Partners—if other investors suffered losses similar to Zamansky’s clients, the aggregate loss in December could amount to over $1 billion.

Rosenberg, who is an alumnus of the University of Michigan and a member of the school’s Economics Leadership Council, has periodically updated the strategy’s growth on his profile page for the organization. In July of 2017, the YES group managed $3.4 billion. That total grew to $4.5 billion as of June 2018, according to his bio. Charging 1.75% on a mandate of more than $5 billion means YES stood to bring in revenue of at least $87.5 million per year. Close to 80 basis points of the fee is used to cover trading costs, according to an email exchange filed with a FINRA complaint.

Neither Buchsbaum or Rosenberg responded to requests for comment on this story.

According to one source, of the more than 1,000 clients invested in the strategy at the time, “fewer than 100” have filed complaints with FINRA. Some are seeking damages as high as $1 million. At least five disputes are labeled pending, meaning actions or allegations have not been resolved or proven, and all the others have been denied unilaterally by the brokerage.

How losses piled up

The goal of the Yield Enhancement Strategy is to give investors better returns or cash flow, typically on assets that don’t themselves yield much, according to marketing materials for YES reviewed by WealthManagement.com. To do that, the YES team uses an investor’s assets as collateral in a margin account to execute an esoteric options strategy called an “iron condor.”

In an iron condor, a trader uses four different options contracts with the same expiration date but different exercise prices, usually for an index (YES used European-style contracts for S&P 500 Index futures). Traders create two spreads by simultaneously selling calls and puts to generate income, or premium, and buying calls and puts to hedge risk and contain potential losses. As long as the price stays within the breakeven points created by the spreads, you make money. However, sudden price swings can blow past the breakeven points of the iron condor, resulting in losses for most of the positions and a losing trade.

The strategy itself is benign and “looks fantastic” in periods of low volatility, said Daniel Powers, a portfolio manager at Vector Wealth Management, which runs options overlay strategies, but avoids the iron condor approach. Money managers use options strategies for a variety of reasons, including to elevate investment performance. To differentiate from other managers, some leverage up their strategies to boost returns, widening the potential downside. Powers said that vulnerability, especially in a complicated trade like an iron condor, makes him uncomfortable.

“The reality is all of the short [volatility] strategies are, in essence, based on convexity,” Powers said. “Things get worse as the trade goes against you.”

In 2018, volatility spiked in February and March and was relatively tame through the summer. But it returned with a vengeance late last year. In December, the CBOE Volatility Index, also known as the VIX, reached its highest level since 2011. 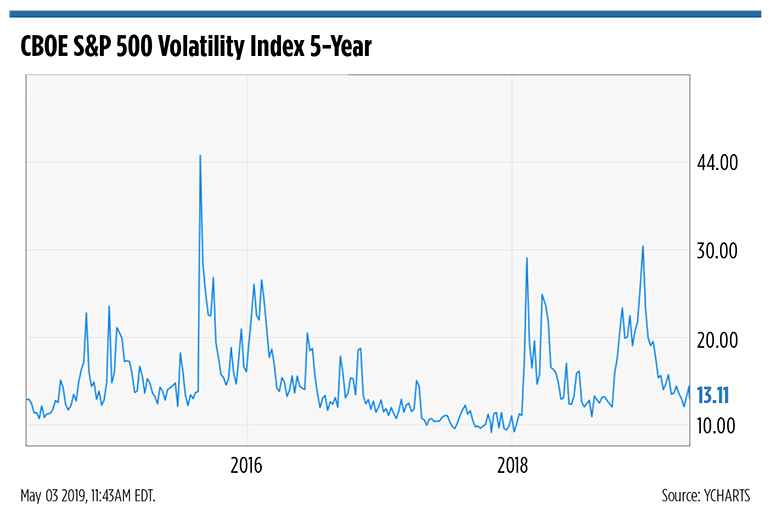 “I don’t blame the reps. I blame the firm and I blame this YES strategy group,” Zamansky said. “They are in an office on Park Avenue doing all the trading and it’s advisors all over the country who are asking the right questions and not getting all the information, or the right information, to tell clients.”

“I would expect them to pounce on these customer comments”

Most customer disputes settle before or during arbitration and many loyal investors continue to work with their advisor afterward, according to Matthew Thibaut, a partner with Haselkorn & Thibaut who previously represented UBS in customer disputes while at another law firm.

Those cases don’t typically garner much attention, but complaints that a program like YES was misrepresented and disseminated to a network of brokers will pique the interest of regulators, he said.

“I would expect them to pounce on these customer comments and request to see documents from the brokers, and the firm, and start an investigation,” said a former FINRA investigator, who was not authorized by his current law firm to comment publicly about claims related to YES.

Without knowing what other disclosures or information were shared with investors, he said the marketing materials for YES could be troublesome for defendants.

A slide deck for the program says it has “limited correlation with the market or a single stock position, the YES Strategy may provide portfolio diversification.” It also says the strategy uses upside and downside protection to prepare for “unexpectedly volatile market conditions.” The overview states the group might also engage in other options strategies “with limited risk.” 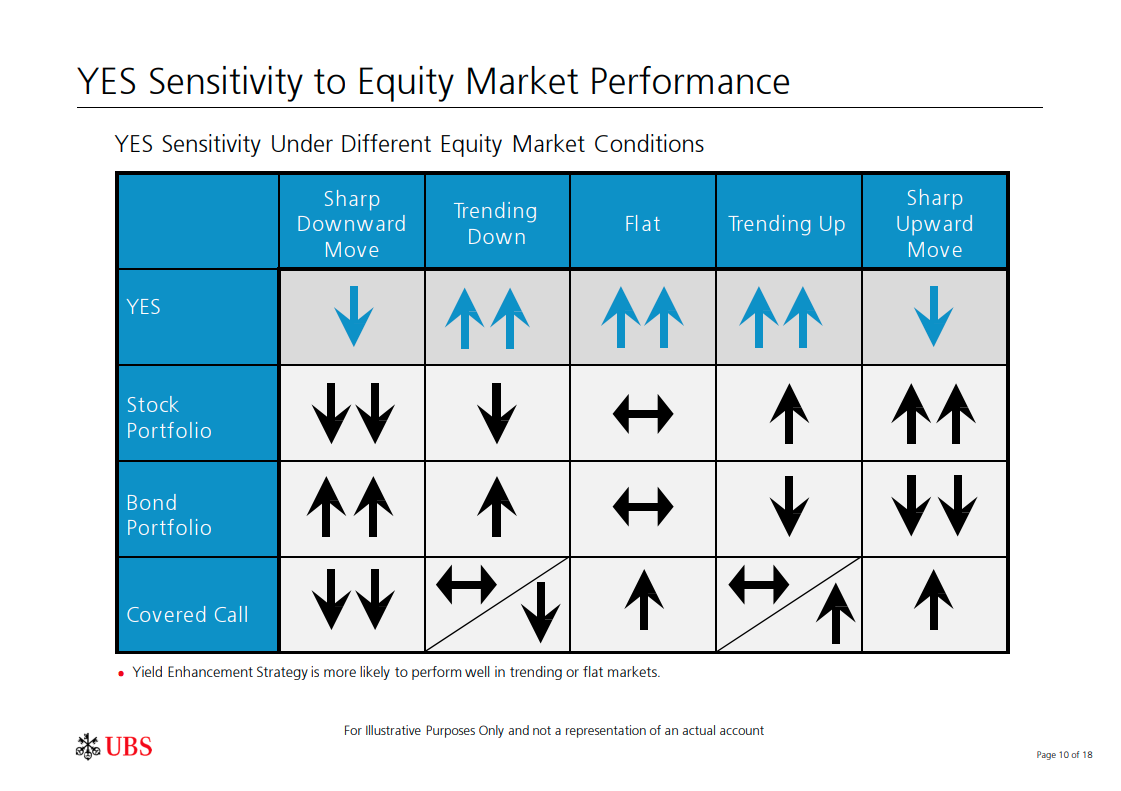 “If the purpose was to limit downside risk, it seems like this completely missed the mark,” the former regulator said. “What the hell were [they] doing that could expose the customer to that kind of loss?”

Still, the same deck includes two slides dedicated to “Considerations and Risks” that state significant market moves, up or down, can result in losses. Investors are typically presented additional disclosure information and required to sign additional acknowledgements to participate in strategies like YES.

“FINRA is really driven, not to an insignificant degree, by public perception,” the former regulator said. “If the disclosures were clear to customers and the strategy matches the account documents, I could see FINRA saying ‘you should have known, we’re not going to hold the firm accountable.’”

To read the full story: https://www.wealthmanagement.com/alternative-investments/ubs-clients-burned-iron-condor-strategy

You may want to start talking about your retirement strategy now. Dial 1-800-957-5604 x 200 and set up a complimentary strategy session to understand what your goals are, understand what objective you’re trying to accomplish, your risk tolerance, and let us show you how to reduce your investment fees from stocks, bonds and mutual funds down to one point, or five percent when you work with our investment advisory platform. Dial 1-800-957-5604 x 200, and on the web at: DreamRetire.com